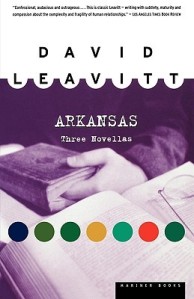 According to the blurb of the Hungarian edition, this book belongs to the genre of gay fiction but it also says that you could easily leave the „gay” out of its description. And this is certainly true – this book is indeed fiction, and it doesn’t matter that the stories are mostly about gay people. (Someone raised the question in a short discussion about Arkansas: if you could safely omit „gay” from the genre description, why say it at all? Good question, indeed.)

Anyway, getting down to Arkansas. The book contains three rather long short stories (or short novellas, perhaps). Each story is very different from the other two, so it’s easier and more meaningful to deal with them separately. The first one, The Term Paper Artist is about a writer who’s currently not writing at all. He moves back (temporarily) to his family to Los Angeles so that he can spend his time free from all worldly difficulties while pretending to work. He spends his days in the library, supposedly doing research for his next book, and in a specialized bookshop, flicking through porn magazines. He’s lazy as hell, but he’s well-educated and he really can write well, so when a college student approaches him and asks him to write a term-paper for him in return for sexual favors, the writer agrees to the offer. And after the first occasion, several more would-be clients approach him with the same request.

I found it a bit surprising, but this story is actually very funny. Even though the world in which it is set reminds me heavily of the Los Angeles of Bret Easton Ellis’ early fiction, and the characters also resemble the protagonists of Ellis’ books in the sense that they have absolutely no moral concerns about anything (they trade freely in sexual services; they smoke weed just as naturally as other people would smoke regular cigarettes; and so on), this story isn’t nearly as depressing and unsettling as a novel by Bret Easton Ellis. The reason for this may be that Leavitt’s characters are not nihilistic or disillusioned (on the contrary: they even seem to have some aims in their lives) and this gives a nice, light-hearted touch to the story.

The second novella, The Wooden Anniversary is very different from the first one: it’s not like a sunnier Ellis story – it’s more like a TV sit-com. It tells the story of two old friends (a straight woman and a gay man) visiting their mutual friend in Italy, where she teaches cooking, together with a charismatic Italian man, while her alienated husband spends most of his time in Rome. The company spends the visit reminiscing about the past, cooking, drinking and going on day-trips – and of course, all kinds of complicated feelings and desires arise among them, and there are a lot of head games going on in the background. There are a couple of bizarre and very dark details in the story (e.g., one of the characters has a frightful, hallucination-like experience in a park in Florence which he visits with the intention of picking up someone for a couple of hours), but on the whole this is also a relatively light story, and all the emotional fussing around is more comic than tragic or even dramatic. (Of course, it’s painful for the characters, but this story isn’t written in a way that it would be painful for the reader, too.)

The last story, Saturn Street is again very different. It’s about a young man who has a voluntary job at a food delivery service, and delivers meals to HIV positive patients. He strikes up a friendship with one of his clients, sometimes sharing a meal or watching a video with him. He feels a tender desire for his dying client, while simultaneously he tries to get over the recent death of his long-term partner. Saturn Street is a very sad and very gentle story; it’s full of longing, nostalgia, pain and disenchantment, and it has a touching, dream-like quality – it’s certainly a memorable read for me.