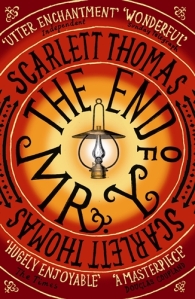 Scarlett Thomas was brought to my attention by a blogger acquaintance of mine, and I’m glad that she recommended her to me because after reading this novel it’s pretty obvious that Thomas is really an author I’m bound to love.

The End of Mr. Y belongs to the sub-genre of scholarly adventure books. The heroine of the novel, Ariel Manto is doing a PhD in the topic of thought experiments, she loves Derrida and Heidegger, and she’s especially interested in the works of an obscure 19th century writer, Thomas E. Lumas. Lumas’s books are virtually impossible to acquire now, however, one day Ariel comes across his most mysterious novel, The End of Mr. Y – which is, as legend has it, a haunted book and anyone who reads it will be cursed.

Lumas’s book is the (perhaps real, perhaps fictitious) story of a man who, after drinking some magic potion, is able to enter a strange virtual world, the Troposphere, where he can freely jump into people’s minds and learn their thoughts and memories – seemingly without any adverse consequences whatsoever.

Ariel is enchanted by this story and she quickly resolves to visit the Troposphere, no matter what. As it is, this journey isn’t that easy to organize, and it is not without its dangers, either.

So far I have only read one similar scholarly adventure novel, Possession by A. S. Byatt, and despite all the beauty, the lovely structure and all the postmodern, scholarly arguments I love so much, I didn’t really like the fact that Byatt’s novel contains way too much primary texts (diaries, letters, poems) on which the protagonists’ literary detective work is based. The abundance of primary material entails that the characters of the outer narrative are pushed into the background, which is a pity, because I was much more interested in them than in the „real” protagonists of the novel.

I was afraid that Scarlett Thomas would do something similar in this book. I liked Ariel from the very first page, I was interested in her way of thinking, and I wanted to know what would befall her, so I would have regretted if after sketching the „real” world, the author’s attention had turned to the fictive world within. Fortunately this is not what happened. Even though towards the beginning of the novel we can read a couple of excerpts from Lumas’s book, these are mostly there for the purpose of providing the reader with some information about the obsession of Mr. Y (which Ariel will mirror soon enough) and about the way the Troposphere works. Ariel, however, remains the real protagonist throughout, and the book is about her immensely exciting (mostly intellectual) adventures.

By the way, despite the fact that in this novel Ariel is the typical out-of-this-world academical type (it seems that in this genre a literary scholar must be absolutely penniless and must live in a cockroach or mouse-infested/damp/moldy/windy flat – and Ariel lives up to these expectations marvelously), it quickly transpires that in fact everyone in this book is an academical person, even those characters who are not scholars by profession, and everyone spends their time discussing theoretical questions and problems (such as the origins of the universe, time travel, relativity, causality, Derrida, deconstruction, the connection between language and thought, metaphors, belief, phenomenology and others) all day long.

However, the novel is not a boring philosophical or linguistic treatise trickily disguised in the form of an adventure novel. The issues the characters talk about have a very concrete significance for them, in fact, the topics they discuss are often matters of life and death for them. For instance, the Troposphere, which has a central significance in the characters’ lives and which is often more real and definitely more intriguing than reality, is made up of language (thoughts), and the metaphoric expressions assume a literal meaning in this world: e.g. “trains of thought” really appear as trains in this world. Or I could also mention Ariel’s neighbor, Wolfgang, for whom it is vitally important to describe reality with language as accurately as possible, and he can engage in long arguments with Ariel because he’s not willing to believe that the English language contains no separate word for the kind of lawnmower on which people sit, instead of pushing around.

And since the issues they deal with are truly important for the characters, and since they passionately love to think, argue and explain, no argument or discussion ever becomes boring for the reader. I think that any speculation or argument presented with sufficient enthusiasm and devotion can be absolutely absorbing, no matter how uninteresting the topic might be. However, in this novel fascinating topics are discussed enthusiastically by likeable and interesting characters, so the effect is twice as absorbing.