Henry James’s classic novella is a horror story and the reinterpretation – and sometimes it even seems: the parody – of classic horror stories at the same time. In the outer layer of narrative, we get to know a group of elegant society people who spend their evenings telling ghost stories. Then one day a member of the group announces that he’s in possession of an especially eerie story, left to him by an old acquaintance. Answering the curious urges of his friends, the man sends for the story, and when the old, yellowed document arrives, he reads it out loud to his company.

From this point on, the characters of the framing story are not mentioned anymore, and the rest of the book consists of the (ghost) story itself, as experienced and put on paper by the heroine of the story. The main character in the inner narrative is a young girl with a vivid imagination, who bravely accepts the post of governess in Bly, somewhere in the innocent English countryside – even if the the circumstances surrounding the position are somewhat suspicious: as the girl learns from her prospective employer, the previous governess lost her life, and the employer also adds that he needs an employee who is willing to solve every problem on her own, and never, ever troubles him with requests or complaints.

The young governess is flattered by the trust of her employer, and she’s sure she’ll be able to handle her tasks – but soon she realizes that she’s not altogether prepared for what awaits her in Bly. On the very day of her arrival she’s troubled by an unpleasant premonition, which disappears for a while when she gets to know her enchanting, innocent, intelligent pupils, Miles and Flora, who seem like a dream come true for any governess. The idyll, however, doesn’t last long, because the governess soon starts to notice uncanny apparitions: she sometimes catches sight of a strange man and a woman in and around the house, and soon she convinces herself that the apparitions aim to do harm to her lovely pupils, and that it’s her most noble duty to save them from the evil spirits – who, it seems, are not noticed by anyone else – or aren’t they?

Henry James builds tension in this story in a masterful and most deliciously confusing fashion, and leaves you completely at a loss. For one thing, he keeps planting contradictory details in the story: it’s enough to think about such small details as the fact that the governess once claims that she wouldn’t be able to describe the physical appearance of the ghost she encounters because he’s so plain and bland, and then in the next sentence she goes on to elaborate on the ghost’s characteristics, down to the most minute detail.

Besides this, James continuously makes you entertain doubts about the honesty, innocence, motivations and sanity of the characters: in one moment the pupils seem to be wonderful angels, and in the next moment, they appear as manipulative little devils, harboring dark secrets; in one moment it seems that the only aim of the governess is to save her charges from every imaginable danger, and in the next moment she seems to be a deranged, attention-seeking young girl willing to go into any length just to arouse the interest of her employer; and Mrs. Grose, the old housekeeper of Bly sometimes behaves as if she believed the wild stories and conspiracy theories of the governess, while at other times she treats the governess as if she were dealing with an unpredictable, dangerously insane person.

James also uses a whole array of narratological tricks – it’s worth noting, for example, that the story abounds in unfinished sentences, and the conversations between the characters are either so intricately wrought yet unrevealing, or so full of double and triple meanings that it’s often impossible to decipher the true meaning and intention of the speakers. Besides all this, James also makes use of the usual elements of classic ghost stories – the walls of the idyllic country house hide shameful secrets, there are midnight apparitions galore, and the candles always go out in the worst possible moment.

And all this results in a deeply unsettling, unfinished story that (until the very last moment and even after that) offers at least two possible interpretations, a story which leaves you wondering: is it even a ghost story, or is it something else entirely? And since Henry James casually leaves the framing narrative unfinished, we never learn about the reactions of the people who listened to the story, and we get no road-sign whatsoever as to how the main story could be „correctly” interpreted. This is, in the end, an extremely smart, bewildering story – I suspect it’s too smart a novella to offer up all its layers in a single reading. I’ve already read it a couple of times, and I don’t feel I’m at the end of it yet. 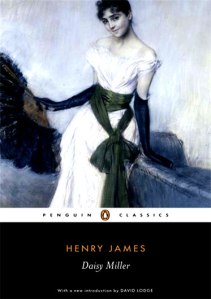 The protagonist of Henry James’s novella is Daisy Miller, a pretty, fun-lovin’, silly American girl who’s traveling through Europe with her mother and her brother. Daisy is a rich and elegant socialite, but she doesn’t belong to the elite class per se – she’s much too indiscreet and rebellious for that. For instance, she doesn’t hesitate to talk to people she hasn’t been formally introduced to, and she’s also happy to go for solitary walks with a man who is neither a member of her family, nor her fiancé. At the beginning of the story, she gets acquainted with Winterbourne, an American man who’s been living in Europe for a long time – and who is therefore no longer up-to-date as to the proper American manners. Winterbourne is immediately enchanted by Daisy’s beauty and her easy-going, open personality, but he doesn’t fully abandon himself to his budding passion – instead, he starts to over-analyze everything and he starts to wonder whether Daisy is indeed as innocent and nice as she seems.

Winterbourne keeps wondering about this question throughout the story, and even though he accidentally falls in love (?) with Daisy, he cannot come to terms with the basic impoliteness of Daisy’s conduct. (Of course, he only frowns upon her behavior when she’s being impolite in someone else’s company – when they first meet, he’s more than happy to accompany the girl on a trip to a castle nearby, after half an hour into their relationship.) So anyway, when they meet again in Rome some time later, Winterbourne merely watches with a condescending smile on his face how Daisy runs to her ruin, and he doesn’t even try to understand her behavior.

When I read about supposedly unruly, I-have-it-my-own-way characters like Daisy Miller, I often wonder if their behavior can really be considered rebellious and shocking, just because they live the way they want to live, say what they want to say, and ask what they want to ask – even if this is not acceptable in their social circles. And I wonder whether being rebellious and shocking is something they consciously do. In the blurb of my copy this question is asked downright: is Daisy Miller deliberately going against the norms of the society she lives in, or is she merely unaware of the norms she’s supposed to adhere to?

Well, I think neither of the above is true. Daisy Miller knows the rules she should adhere to (and sometimes it seems that she’s troubled by the fact that she’s shunned by society because of her lack of adherence), but it’s not due to some youthful folly or defiance that she keeps breaking the rules – it’s simply because for her, it’s truly and utterly incomprehensible why she shouldn’t spend her time with someone whose company she enjoys.

Sure, the morals and rules of the end of the 19th century were somewhat different from the rules we have now, and when I read novels dealing with similar themes in the past (I mean the theme of the clash between the American aristocracy and an independent woman – see Edith Wharton’s novels), sometimes I used to think how good it is to be alive here and now, in a world much less suffocating. But now I read this novel in a different way – I didn’t keep thinking about how lucky I am to live in a part of the world where presumably no-one is shunned and/or destroyed for the exact same crimes Daisy commits – because I figure that the Daisy Millers of the present also shock the others, only with different crimes. And I find this idea almost unbearably sad because a Daisy Miller never goes out of her way just so that she can shock people – she simply wants to live, innocently, harming no-one, and she does live, as long as “they” let her. And even though, like I said, the male protagonist’s greatest dilemma is whether Daisy is innocent or not (not necessarily in the sexual sense), I felt that she is.

By the way, Henry James – contrary to me – doesn’t get overly moralizing, and I don’t think he tries to teach me any kind of lesson or great truth. And because of this, I prefer him to, e.g. Theodore Dreiser, even though their styles and world-views seem to be somewhat similar.

And as regards the author’s style – it’s often mentioned about James that deciphering the meaning of his sentences, and understanding his subtle references is a feat in itself. Well, it’s quite probable that I overlooked a whole lot of the hidden references and other subtleties, but I was surprised by the fact that after the first couple of pages I had no trouble at all following his lovely, meandering, endless sentences. Translating his work must be a nightmare, but reading him in English was much less difficult than I expected.