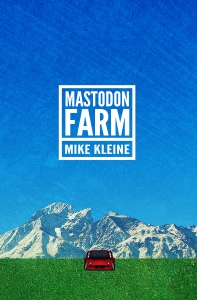 The blurb of this novella was not too revealing for me, but I was lucky to know in advance that it was about existentialist-sad themes. As you might guess from the contents of this blog, I happen to like such stories. And if there’s one thing I like even better than a sad-existentialist story, it’s a sad-existentialist story written in the second person singular, so I was pleased to find that Mastodon Farm was written in this narrative mode. So you might say I was favorably disposed towards this novella from the very beginning, both because of its themes and its interesting narrative mode. And when I started to read it, it turned out that Mastodon Farm was indeed a good book.

The protagonist of the story is a rather well-known person (but we don’t know who he is, since in this novella he is „you”, or rather, „you” are him) who lives in a gorgeous New York City apartment and spends his time uselessly in a variety of ways: he attends parties and book launches; he drives around in his car; he talks to movie stars on the phone; he goes to the video store to rent Lars von Trier’s Breaking the Waves and then goes home frustrated because the film is not available; he conducts pointless, circular, infinitely dumb conversations with (a man called) James Franco (is he the James Franco?) about whom you cannot decide whether he is the protagonist’s roommate, employee, lover, friend, or none of the above, or all of the above; and so on.

As for a „proper” story, there is none. The sentences are short, deceptively simple and sometimes mind-blowingly, sickly funny. The chapters themselves are short, usually only one or two pages long. Most of the chapters feel like separate short stories in themselves: they are „whole” on their own, and even though they do not tell a story and contain „nothing”, their emptiness feels like a form of wholeness, and the „nothing” they contain often manages to break my heart.

What’s more, you don’t even know for sure whether the reality presented in the novella is indeed real: you cannot decide whether the „nothing” really happens, or everything within the book is fiction (or a film). There are several elements here which make this book very cinematic. For instance, there’s always some background music going on, and the music definitely feels like a movie soundtrack to me – the individual tracks are always named, and even though I don’t know many of the songs mentioned in the novella (and didn’t check out all of them, though I did check out some), simply the song titles themselves suggest that the songs have something important to do with the contents of the episode they provide the background for. And the episodes themselves often feel like a movie: for example, there’s a chapter about a party, and while we witness what’s going on in the room, the scene is sometimes interrupted by „cuts” to events going on outside.

Moreover, many of the characters are „real” movie stars (e.g. the protagonist is on friendly terms with Gwyneth Paltrow and Uma Thurman; he knows Ashton Kutcher; he does drugs together with Kirsten Dunst; etc.). This in itself shouldn’t necessarily make the book strongly cinematic/fictional, but this is what happens here: the real movie stars mentioned in Mastodon Farm serve to make the reality of the novella’s world even more questionable/movie-like. Why? Because a „real” movie star is also a fictional character, an image called Uma Thurman or Kirsten Dunst – of course this image is not only an empty shell, there’s „content” in it, there’s a real person behind the public persona – only „we”, ordinary humans will never know this real person. However, Mike Kleine only borrows the names of these actors, (a fictional version of) their public persona, without the content (which is not available for us anyway), and this way he creates the effect that the world of Mastodon Farm is a fictional, unreal world (or rather: a fictional world raised to the second power) – something which consists only of names, of surfaces, of images without content.

This very powerful fictional quality makes the uncanny modernity, contemporariness and „real-ness” of the novella even more frightening. I mean: this book comes out in 2012 and the story is set sometime around the present day – I cannot pinpoint the exact year, but the year can be guessed with relative accuracy from, for example, the songs mentioned in the story. The characters often listen to or talk about music which might be aired on the radio right now, perhaps in this exact moment (mainly, I guess, in the U.S., but e.g. Lana Del Rey‘s „Born to Die” is aired on Hungarian radio stations, too). So it often seems that the novella indeed manages to capture the moment, this exact minute – and the implications of this up-to-date quality are infinitely scary to contemplate: if the novella is set in the present day, if I know the same actors the protagonist knows, if I listen to the same songs the characters listen to, then it means that the „nothing-world”, the imitation/fake world of this book is in fact my world, and the concrete reality I live in is the same as the highly unreal „reality” of the characters.

This scary feeling is even more intensified by the narrative mode: because the second person singular is not used here just because writing in the second person is cool or postmodern or fashionable. Mike Kleine manages to write more than a hundred pages in the second person with a consistency I very rarely witness, and since the fictional reality of the book highly resembles my real reality, Mastodon Farm becomes scarily, uncomfortably personal after a while and I start to feel that the „you” of the book is indeed „me”, and „I” conduct those meaningless conversations, „I” come up with different identities for myself depending on the person I’m talking to, and „I” contemplate my own life when I read about the emptiness of the life of the protagonist referred to as „you”.

And this is a deeply disturbing and unsettling experience – anyway, I like to read exactly to gain experiences such as this.

By the way, Mastodon Farm reminds me of the early novels of Bret Easton Ellis, with all their nihilism, meaninglessness and their nameless, interchangeable characters. And it also reminds me of Tao Lin’s Richard Yates, because that novel also features famous names devoid of their content and that novel is also written in these strange, monotonous-looking, often repetitive, minimalist sentences – the remarkable thing here is that I actually liked reading this novella (I read it twice within a couple of weeks, liking it even more for the second time), while I hated reading Richard Yates.

In connection with this Ellis-like quality and the contemporariness of Mastodon Farm, something else came to my mind. The first Ellis novels are set sometime at the end of the 1980s, and I guess they must have felt very contemporary when they were published because they featured elements of the then-present day reality. However, the cult of sunbathing, the music of the 1980s and the other contemporaneous details are not so contemporary anymore, therefore, no matter how scary I consider e.g. Less Than Zero (by the way, I consider it very scary), I don’t feel so strongly that that world could easily be mine as well. But here – I feel this.

Finally, something about the language usage and minimalism of Mastodon Farm. I love the way the author manages to simultaneously convey a whole array of thoughts and feelings with his simple, repetitive sentences. Here are two examples. The first one comes from the chapter where someone runs into the protagonist’s car and the woman driving the other vehicle dies. The police and the ambulance arrive, an EMT examines the protagonist and then the protagonist talks about the accident with some police officers. The following conversation ensues.

You talk to the cops.
“Am I in trouble?” you ask.
“You’re not in trouble,” a young cop says.
You freak out a little.
You can smell pomade in your sweat.
“Everything is under control,” someone says—another police officer.
You freak out some more.

What I like in this conversation is the discrepancy between the police officers’ words and the reactions of the protagonist. Because why on earth should you panic when you are told that everything’s fine? However, the protagonist does panic: his reactions are the opposite of any normal reaction, they are „unreal” – which suits the cinematic/fictional world of the novella just fine. What’s more, the conversation is funny as hell – and I think it’s a considerable achievement to depict the unreal quality of the protagonist’s world, show his disturbed state of mind and be funny as well at the same time – and all this in seven short lines.

The other quote is from the chapter where the protagonist is sitting by a lake with one of his acquaintances and they have the following conversation.

I don’t want to over-explain this excerpt, because I simply think it’s beautiful – beautiful in a kind of screwed up, melancholy, slightly ironic, very smart, 21st century way.

And in the end, this is what the whole book is like. And even though you probably won’t remember too many concrete details after finishing reading (because there aren’t too many concrete details to remember), and you won’t be able to tell the story (because there’s no story), the screwed-up, nihilistic, too-clever, yearning, disillusioned, sad, unreal, frightened-and-frightening feeling that pervades this book is bound to be memorable.

One thought on “Mastodon Farm by Mike Kleine”